The Printer and The Preacher by Randy Peterson Book Review

This story title intrigued me and the book shared how the strange friendship between George Whitefield and Benjamin Franklin was created.  I was able to select this book from BookLookBloggers.com and provide my review.  These men together defined what it means to be an American. 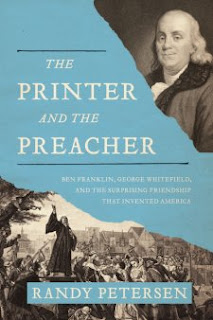 They were the most famous men in America.  They came from separate countries, followed different philosophies, and led dissimilar lives. But they were fast friends. No two people did more to shape America in the mid-1700s.

Benjamin Franklin was the American prototype: hard-working, inventive, practical, funny, with humble manners and lofty dreams. George Whitefield was the most popular preacher in an era of great piety, whose outdoor preaching across the colonies was heard by thousands, all of whom were told, “You must be born again.” People became excited about God. They began reading the Bible and supporting charities. When Whitefield died in 1770, on a preaching tour in New Hampshire, he had built a spiritual foundation for a new nation—just as his surviving friend, Ben Franklin, had built its social foundation. Together these two men helped establish a new nation founded on liberty. This is the story of their amazing friendship.

Here are a few highlights from the book that I enjoyed:

Success was available if you were willing to work for it. - Ben Franklin

How on earth did these two very different men become friends?  It began as a business partnership.  In 1739, Franklin was one of several printers to publish Whitefield's journals and sermons.

Newspapers had existed, but it was Ben who harnessed their power.  George employed advertising techniques that were cutting-edge for business enterprises and absolutely revolutionary in the church.

Some of this correspondence has surely been lost, but the letters that remain provide a fascinating slideshow of a relationship-in-progress between two extraordinary people.

The two men carried on a meaningful friendship for more than thirty years.

George was an Englishman who loved America, crossing the ocean thirteen times in a period of thirty-two years (all the more stunning when you consider that each trip took two to four months.

Each of these men individually had a major influence on the emerging American society.  The Great Awakening that Whitefield carried through the colonies set a tone of personal religious commitment that endures today.  Yet Franklin's humanism also endures.  The ideals he promoted, the civic responsibilities of citizens banding together for the common good, took root in the founding documents of this nation.

About the Author: Randy Petersen has written more than fifty books on subjects ranging from history to relationships, psychology, sports, and even word games. Formerly an editor and writer with Christian History Magazine, he also prepares curriculum for small-group Bible studies. Apart from his writing, Randy teaches public speaking at a community college, preaches occasionally at his church, and directs in area theaters.  He lives in the Philadelphia area.  http://randypetersen.com/